The most eligible bachelor of Bollywood is going to break many hearts of his female fans. He made his debut in Bollywood with Masaan in 2015. His sweet smile made the girls bowled out. Yes, he is none other than Vicky Kaushal. His acting in Sanju, Raazi and URI is highly praised. Later, he also won the Filmfare Award for the Best Supporting Actor for the films Sanju and Raazi. We are eagerly waiting for upcoming Vicky Kaushal movies in the coming year.

However, Vicky is also in the limelight because of his love life.  From Harleen Shetty, Huma Qureshi to Bhumi Pednekar – everyone was known as Vicky Kaushal’s girlfriend. But now it is heard that his relationship with Katrina Kaif has been quite intense. Even it is also heard that they are going to tie a knot in the coming year.  Undoubtedly, they are the most unpredictable couple in Bollywood. They are going to lunch together, going to the party together. Even the rumoured couple is planning for a New Year vacation together also. Recently, they were seen together in a photo where they were posing with the chef after a dinner date. The fan page of the actor shared that photo on Instagram.  Although neither of them publicly acknowledged their relationship.

They were also caught in camera leaving Diwali party together to spend their time alone. Their romance has blossomed everywhere in the tinsel town. And they are asked this million-dollar question everywhere.  Katrina said recently “rumours are part of our lives. we are accustomed to these rumours.” Both of them are thinking to surprise their fans in the New Year. We are waiting to see Vicky Kaushal and Katrina Kaif together. 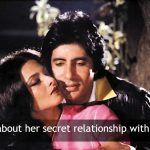